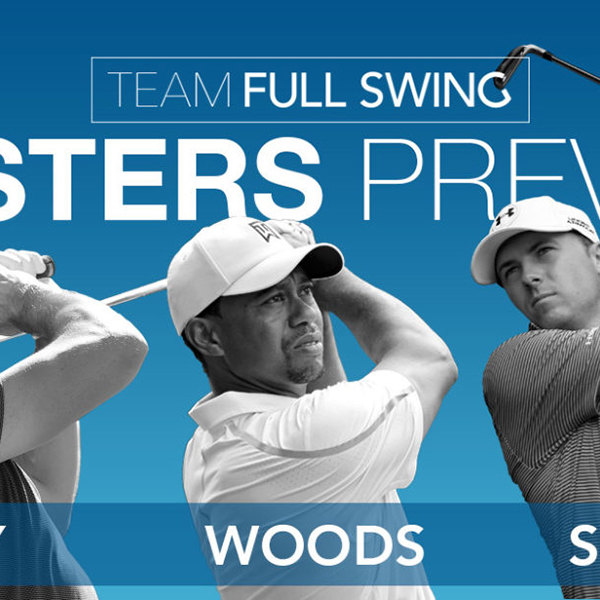 To call it golf’s version of the Super Bowl week wouldn’t do it justice. But there really isn’t anything you can say, write, type, or tweet that would do The Masters justice. It’s golf’s most prestigious tournament, with an immense history, played on the sport’s most iconic course – Augusta National Golf Club.

The Masters is always compelling and is a must watch, but this year’s tournament might be the most talked about and awaited Masters in quite some time. Coming in, Full Swing ambassadors Jordan Spieth, Jason Day, and Tiger Woods headline many of the storylines and questions that fans can’t wait to be answered at this year’s Masters. How will Tiger perform in his first Masters appearance since 2015? Can Jason Day keep up his great play as he strives to reach his goal of returning to no. 1 in the world? Will Jordan Spieth capture some magic at Augusta, or will another young gun win the year’s first major?

With a combined total of over 100 professional wins, Full Swing’s world class team of golfers have been keeping their skills sharp for the year’s first major tournament by practicing on our Full Swing Pro Series line of simulators with trusted Dual Tracking technology. This year’s tournament kicks off Thursday morning, and here is what to look for and some players to watch throughout the weekend.

JASON DAY, 30 – Jason has enjoyed a very successful start to the 2017-2018 Season, racking up five top-25s finishes in six starts, including his first win of the season at the 2018 Farmers Insurance Open. Two weeks later, he tied for second in the AT&T Pebble Beach Pro-Am. Day has shown he is one of the most talented players in the world, and with an offseason of practice on his Full Swing simulator, everything suggests he has a great chance to take home his first green jacket at the Masters!

JORDAN SPIETH, 24 – Jordan has had a strong start to the 2017-2018 Season, with six top-25s finishes in eight starts. In Jordan’s previous four appearances at Augusta National, he has finished in second or better, including winning his first green jacket at the 2015 Masters. Jordan has had some great finishes so far in 2018, and we know he will be closing in on his first win of the season soon with all of the great practice he has gotten on his Full Swing simulator. Check out Jordan’s amazing hole in one shot on his Full Swing Pro Series simulator.

TIGER WOODS, 42 – It is hard to argue that the biggest story heading into this weekend is not Tiger Woods. Over the past few weeks, Woods has shown significant progress in his game including back-to-back top five finishes at the Valspar Championship and Arnold Palmer Invitational. While not having as many starts in the past few years as his fellow competitors, Woods’ play during his comeback and countless hours of practice on his Full Swing simulator have made him one of the favorites to emerge victorious at Augusta, a place he has won four green jackets.