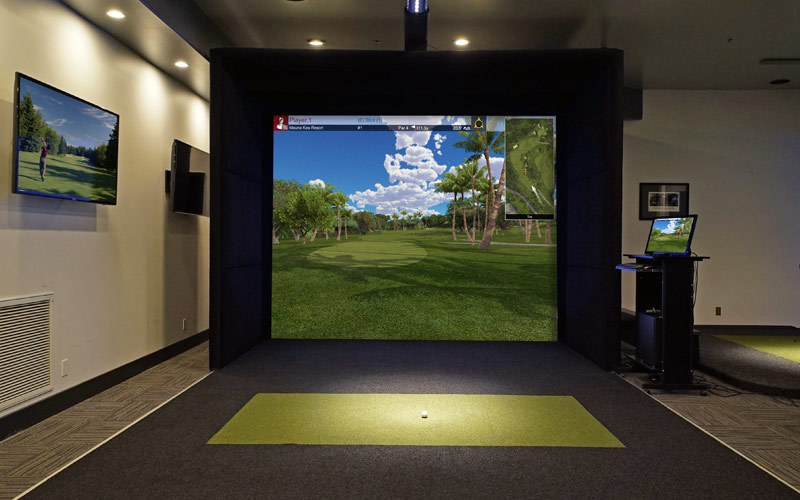 GOLF SIMULATIONS LEAD TO THREE CELEBRATIONS. Fredericksburg High School senior Autumn Durst stands in front of the golf simulator and alongside Edwin Dickens, PGA, the HCM Wellness Center director of golf instruction. She said his direction in tandem with the simulator made the difference in her winning three tournaments, including district.
As Fredericksburg High School senior Autumn Durst prepared for three recent golf tournaments using the HCM Wellness Center’s golf simulator under the direction of PGA Golf Professional Edwin Dickens, she was able to precisely see what was going on in her golf swing, and the corrections she made led to three tournament wins.

On the simulator, each ball a golfer hits will bounce off the screen, but a simulated ball soars down a digital driving range to a green. Displayed analysis then shows the path angle, face angle and other swing variables. On the bottom of the big screen, the ball’s flight arch is revealed, and at the top left of the screen are statistics and comparisons for opportunities to improve. These features allowed Miss. Durst and Dickens to analyze her ball flight and see what happened on each shot. “When I was able to see the information,” she said, “everything that Edwin and I had been working on just clicked and made total sense.”

What’s the bottom line? The week after these sessions she won the Boerne Invitational Golf Tournament, a week later she won an invitational tournament at Comfort, and two weeks after that, she won the 26-AAA District Golf Championship. “The simulator and Edwin really made the difference,” she said. “I was more on target and more consistent than I have ever been.”
Dickens said the simulator can help someone learn the basics of golf, but it can also help a seasoned golfer like Miss. Durst refine her game.

“Autumn and I have worked together for the last couple of years on making changes to her game,” Dickens said. “This year things really started to come together, and the simulator gave us the breakthrough she needed. She’s a visual learner, and the simulator was perfect for her learning style.” When it comes to actual golf course play, simulation helped Miss. Durst. “I have a much better understanding of my golf swing now. Anytime I mis-hit a shot I can visualize what I saw on the simulator, and I can make an immediate correction to my game,” she said.

Universities believe in her. Both Texas Lutheran University and St. Mary’s University have offered her athletic scholarships. Which will she choose? The question she may be asking is: How often can I come back to the HCM Wellness Center for a training? After all, it has been the game-changing difference.
From Hill Country Memorial